The research taken up by IISER Bhopal suggests that it is not enough to study spike protein alone to develop therapeutic drugs antibodies, and entry inhibitors, since actual infectivity levels may vary significantly based on the presence of other viral proteins like the nucleocapsid (N) protein. 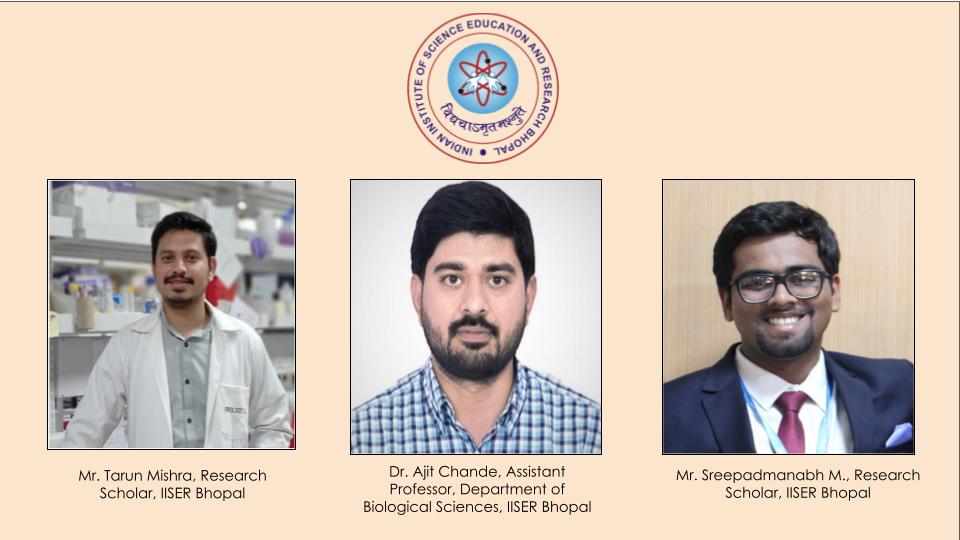 The SARS-CoV-2 virus has an RNA genome, surrounded by a sphere-shaped structure.

This structure comprises various types of proteins, with one of them being the ‘spike protein’ that gives the virus its characteristic spiked look or ‘crown’.

Since the virus is highly infectious, most studies do not use the live virus, but use a similar protein capsule made up of spike that has been filled with another viral core, in a process called ‘pseudotyping.’

Dr. Ajit Chande said current methods of retrovirus pseudotyping are focused on the spike protein of the virus.

Our study picks off from this point, said Dr. Ajit of IISER Bhopal.

While only the spike protein is commonly used for pseudotyping when one wants to study viral entry process or the neutralizing antibody responses, the IISER Bhopal team was curious to see if including the other SARS CoV-2 proteins would influence pseudotyped virion infectivity.

This was motivated by the fact that in a real-world scenario, the spike protein does not operate in isolation, but in conjunction with other viral proteins that are engaged in various auxiliary roles during the course of infection.

The team at IISER Bhopal combined a type of virus vector called the lentivirus with a COVID-19 spike protein to produce ‘spike lentiviruses.’

Twenty-four different SARS CoV-2 viral proteins were included in the pseudovirus ensemble, along with a fluorescent reporter to detect the infected cells.

The infectivity of each of the pseudovirus containing one of the twenty-four proteins was studied.

With this, the researchers found that pseudovirus produced with the nucleocapsid (N) protein had higher infectivity than those containing other proteins, say IISER Bhopal researchers.

The researchers also found that a synthetic microbody that neutralizes spike-pseudotyped viruses was less effective against the N protein-containing pseudotype.

They observed similar patterns during experiments with a spike mutant that is found in the UK variant of COVID-19.

‘We believe that the N-protein promotes the incorporation of the spike protein into viral particles, thereby increasing the chances for each viral particle to bind to the target cell,’ said Dr. Chande of IISER Bhopal.

Their discovery opens up an exciting host of questions for related research in this area, added Dr. Chande.

This important research shows that it is not enough to study the spike protein alone for developing therapeutic drugs, neutralizing antibodies, and entry inhibitors, since the actual infectivity levels may vary significantly based on the presence of core proteins like the N protein.

The IISER Bhopal team plans to carry forward these results into related arenas by exploring potential impact of the N protein on spike across different cellular contexts and also including emerging variants of the SARS CoV-2 in related studies.

Furthermore, delineating the interactions between the spike and N protein would help expand our understanding of the spread of the COVID-19 virus and its effects on various people.

Established by the Ministry of Education (then Ministry of Human Resource & Development), Government of India, in 2008, IISER Bhopal is the youngest of the first five IISERs.

In a decade, the Institute has received several distinctions, duly carving out its own position in the national and international arena.

With a vision to provide high-quality education to the students and contribute to society through its research, IISER Bhopal is the first IISER to have been declared by the Ministry of Education for project competition.

IISER Bhopal is continuously consolidating its position in the National land International rankings and has secured 40th place in The National Institutional Ranking Framework, Ministry of Education, Government of India.

Along with this, IISER Bhopal has gained rank 201 in the overall category of the QS Asia Ranking. The Institute has also been ranked 26 (National Rank, out of 63 in the 1000 Institutes) in the Times Higher Education 2021 Rankings.